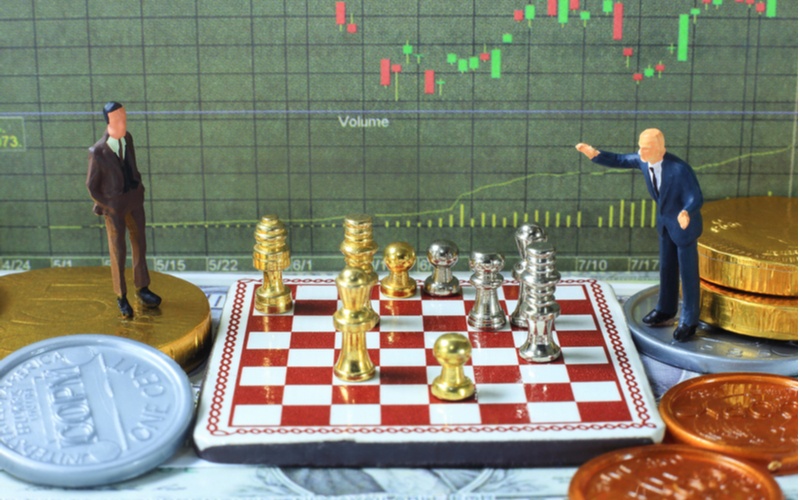 When Anchor originally started in 2012, it consisted of a basket of stocks that we selected using a variety of methods (a blend of CAPSLIM, momentum, PEG and dividend growth).  The strategy created a basket of stocks we felt would outperform the S&P500 over the coming year, then we hedged using SPY options.  The premises was that using our knowledge we could choose stocks that would either perform with or outperform the market index, and they would be hedged with and against a broad market decline using SPY put options allowing us to gain excess returns.  In 2012 and 2013, it worked like a charm.

Then came 2014, when our portfolio underperformed the market.  Anchor was heavily concentrated in dividend stocks that underperformed the market.  This led to an unacceptable condition – our hedge losing value faster than our stocks were gaining.  In other words, we were not properly hedged – which was the entire point of the strategy.  After a full year and a half of sub-par performance, Anchor abandoned the stock picking portion of the strategy and went to straight index investing.  After adding the leveraged version (see other articles on this topic), Anchor fixed the lag problem in up markets, leading to the current iteration of the strategy, which to date has quite pleased us.

However, as many Anchor followers have noted – why not be more diversified? A blend of investments typically performs better, has lower risk and has a much smoother growth curve over time. In the perfect world, Anchor would use a blend of indexes.  Most Anchor users though do not have the capital to implement such a strategy.  To use Anchor, an investor needs at least $50,000 in starting capital.  This means the amount necessary to start goes up for a blended version.  In the ideal world, Anchor would consist of:

The cost of the hedge listed above is the cost for a full year, at the money, hedge, using a range of volatilities over the past few years as a percentage of the long position.  The spread is wider than listed above (e.g. there are times when it was possible to pay more than the above prices), but I would never recommend entering the strategy at those points.  Testing on the short put returns was done through ORATS, going back to 2012 (before that point, data becomes less reliable).  As can be seen from 2012 to the present on both SPY and IWM, the hedge would have been mostly paid off in any given year, while there would have been some lag in paying for the hedge on EEM and EFA – but this is to be expected given the degree of underperformance in international stocks when compared to US based indexes over that same time period.  The listed indexes were selected in a large part based on their option volume and liquidity should not be an issue for any of them.

How much money would it take to implement a blended Leveraged Anchor portfolio?  Given that you would need at least 5 contracts of each position to work the strategy with the short position, a 5% decline in the hedge point (as is done currently in Leveraged Anchor), the cheapest you could arrange would look like (using prices as of 9/23/2019): 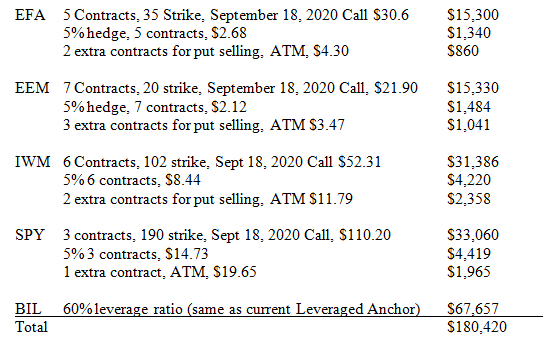 The above is not “ideal” either since the 1/3 ratio in SPY and IWM will make paying for the hedge over the course of the year difficult.  That ratio works much better at the 2/5 level.  However, at that level, the cost of implementing the portfolio increases to about $310,000.

If I had over $300,000 that I wished to invest into the Leveraged Anchor strategy, I would diversify into other indexes and run the strategy for an extended period (over a decade).  Most of our followers don’t have that amount to commit to the strategy, in which case, simply using SPY works perfectly fine.

Because we expect the strategy to perform better over extended time periods using a diversified basket of ETFs, we are looking into what it would take to launch a Leveraged Anchor, across indexes as a mutual fund, private fund or ETF.  If anyone has experience in that area and wishes to discuss it, please feel free to reach out.

Christopher Welsh is a licensed investment advisor and president of LorintineCapital, LP. He provides investment advice to clients all over the United States and around the world. Christopher has been in financial services since 2008 and is a CERTIFIED FINANCIAL PLANNER™. Working with a CFP® professional represents the highest standard of financial planning advice. Christopher has a J.D. from the SMU Dedman School of Law, a Bachelor of Science in Computer Science, and a Bachelor of Science in Economics. Christopher is a regular contributor to the Steady Options Anchor Trades and Lorintine CapitalBlog.